You are here: Home / Fiction

My full-length fiction debut lies ahead through my multiple works-in-progress (WIPs). I’m interested in pursuing a hybrid path, working with traditional publishers as well as going the indie-published route. Current WIPs are:

– In His Shadow, a YA suspense/psychological thriller set in the 1980s about a young woman impelled to solve a mystery about her best friend’s identity before lives are destroyed (think We Were Liars and Mystic River meet Eleanor and Park).

– Untitled five-book YA fantasy, co-written with a prolific YA fantasy author, that is a coming-of-age adventure (e.g., the Harry Potter or Percy Jackson series) of a group of uniquely powered friends and frenemies who must deal with personal demons along with a deadly, labyrinthine battle for power (e.g., Game of Thrones).

– The TimeShifters trilogy, a paranormal series that will take you on multiple journeys through history, sweep you into a world of grim and otherworldly mysteries, and grab your heart with a pair of sparkling, strong soulmates.

Thus far, my published work lies in a specific niche market: personalized novellas, usually given as gifts, that offer readers the unique opportunity to “star” in a romance or mystery as the hero, heroine, friend or even (rarely) a villain.

I was hired to write the novellas that are used as the base story through which customers can live out their (literary) fantasies. My work for this company included originating, outlining and producing three novellas; acquiring, extensive developmental editing and rewrites of other authors’ works (as the company’s Editor-in-Chief); and adapting/rewriting existing novellas for a new audience, such as children or YA. My authorial and editorial stamp can be seen in just about every book published by this company from 2005 to 2012. I also wrote the company’s e-mails and web copy, performed web design work, wrote scripts and found graphics/music for book trailers, and assisted in choosing book covers. 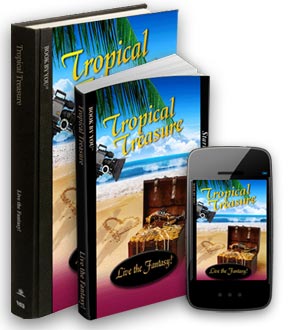 Tropical Treasure (2002, BookByYou), my first novella (about 42K words), takes a skewed look at the world of reality TV and a competition on a remote tropic island that could lead to riches and romance… or an early homecoming and heartbreak. A game-loving heroine tries to move past a bad break-up by impulsively signing up for a winner-takes-all tournament. Too bad her chief rival turns out to be an unbelievably hot (but possibly underhanded) guy able to steal her heart and the million dollar prize. Bad enough she just dealt with a cheating ex-boyfriend; is she clever enough to spot a cheating contestant? Sabotage, sacrifice and plenty of snark are in store in a romance where the cameras never stop rolling. Read more about Tropical Treasure, or go to the publisher’s Tropical Treasure page to purchase or get a free preview. 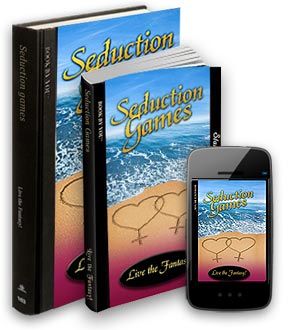 Seduction Games (2012, BookByYou) is one of two same-sex editions of Tropical Treasure, this one featuring two heroines with decidedly different strategies when they both participate in a reality TV competition with $1 million at stake (not to mention each other’s hearts). One is determined to take the high road, especially after having her heart broken by a cheating ex-lover. The other woman is just as fierce in this battle of brains and survival skills, but she’s also willing to play a bit dirty to get what she wants. Passion and rivalry build as an audience watches their every move. If you’ve ever wondered what it’d be like to be on reality show, here’s your chance! Read more about Seduction Games, or go to the publisher’s Seduction Games page at BookByYou.com to purchase or get a free preview.

Treasure Trails (2014, BookByYou) is the second same-sex adaptation of Tropical Treasure, this time with a pair of men who clash, compete and do a lot of comingling in front of the cameras when they’re among the contestants on a reality TV game show. The hot sun isn’t the only thing burning up on the tropic isle of St. Isabelle: screens all across the world could melt when a devious, devilish player is faced with a smart, sexy and even–believe it or not–ethical competitor. Can a go-it-alone kinda guy play by the rules, or will his shady scheming ruin the growing feelings between him and the toughtest heartbroken heartbreaker in the game? Read more about Treasure Trails, or go to the publisher’s Treasure Trails page at BookByYou.com to purchase or get a free preview.

For more, see the sections for Fierce Moon and Night Wolf